DVI-D Dual link cables / connectors are much higher rated on bandwidth (up to 2560 x 1600 resolution / 1600p) compared to single link which is only rated up to 1920×1200 resolutions. Most graphics cards and displays have DVI Dual link ports. Please check the picture below and compare to your current DVI port on the display or graphics card.

This adapter connects HDMI to DVI.

An additional HDMI-to-HDMI Cable is needed to connect the adapter.

The source output needs to support DVI-D digital signals. Most Nvidia and ATI graphics cards support DVI-I which can autoswitch between DVI-D (Digital) and DVI-A (Analog). To explain the differences in the variations of DVI connectors see the diagram below 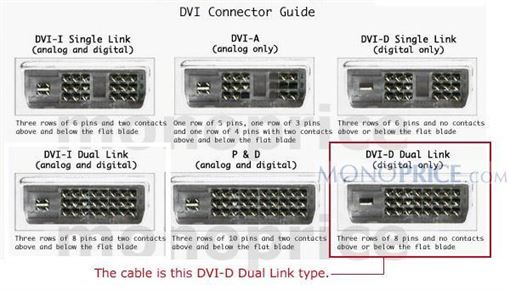