These HDMI over LAN / IP Units can use your existing network infrastructure in a building whether it is wired networking or wireless. > 100Mb/s networks is needed for wired distribution and wireless 300N networks with low latency is recommended when using wireless networking to distribute your HDMI signal.

A Gigabit (1Gbps) Network switch needs to be used with this product since 10/100 Network Switches may have insufficient bandwidth depending on resolution used on this product higher resolutions may not work on 10/100Mbps switches. 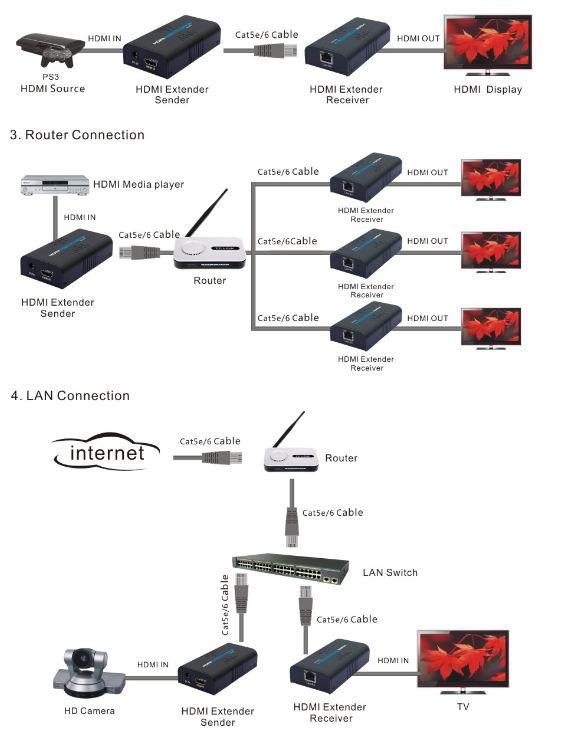 You only need one transmitter per source / player and can connect an unlimited amount of receivers to your network switches and the transmitter will broadcast signal to all connected receivers. If the switches are managed it is recommended to setup different VLAN’s to separate HDMI over IP traffic from other IP traffic on the network. The TX unit will broadcast on network to unlimited receivers. To limit the broadcasting to a specific set of ports on a switch or cascaded switches you need to configure a VLAN for Video & Audio which includes the Transmitter HDMI over LAN unit and all receiver units. A VLAN is not mandatory but recommended when limiting broadcasting traffic to specific ports or wired networks only. If a dedicated switch is installed for the video / audio then VLAN’s are not needed.

The transmission distances via network switches is theoretically unlimited since each network switch or access point / router will reroute traffic to the next switch and signal will not be affected on longer distances or more network hops.

The Transmitter and Receiver HDMI over Network / IP unit can be directly connected to each other via a single CAT6e Cable without switches or networking equipment to send a signal up to 100m between source / player and display. Tested 100% with all common HDMI sources such as HDPVR, Apple TV Player, Mvix (HDMI Version), Sony Playstation 3, Microsoft Xbox 360, DVD players and Blu-ray Players on the SA market.

System module has equipped HTTP server. It can change system IP and MAC Address via webpage. Before building network matrix, the IP and MAC Address of TX and RX must be set and all TX and RX units must have different IP addresses AND different MAC Addresses. The principle is that, all the RX and TX in the same network matrix must be in the same network segment, the IP and MAC Addresses for these RX and TX must be different. TX and RX have a default IP address. TX is 192.168.168.55, RX is 192.168.168.56 which can be customized for your network via a web browser. After the change, press the system reset button for 5 seconds {the small hole beside of HDMI port) to restore IP and MAC to default factory setting.

When connecting the transmitter and receiver use the CAT5e Shielded Twisted Pair Cables at or CAT6 STP Cables. CAT5e FTP / STP depending on quality of cable (Full Copper cables) can be installed for resolutions up to 1080p depending on color depth, refresh rates & equipment signal quality, but only recommended up to 720p/1080i. For 1080p transmissions full copper CAT6e FTP / STP or CAT7 SSTP are required when connecting the transmitter and receiver directly to each other without networking switches.

Please ensure cables are terminated according to 568A or 568B standard as in diagram below depending on CAT5e / CAT6 STP cable type and properly grounded via the ripcord wire inside STP cables. Grounding the cable will also ensure better protection against voltage spikes. STP cables shields better against nearby EMI. 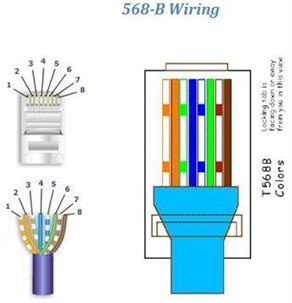 Cheaper CAT6 CCA Ethernet Network Cable as below can be used with this extender but only to about 60% of the max distance indicated on extender. For Full Distance installations and best transmission CAT6 Full Copper Cable is recommended as below